I’m inherently a private person. That trait has been bolstered by the fact that I’m a lawyer. I think in terms of confidentiality. So disclosing really personal encounters to the world seems counterintuitive to me. In fact, I’m not even sure I would have participated in the social media revolution at all if it weren’t for the businesses we owned (https://www.facebook.com/abayethiopiancuisine and https://www.facebook.com/almapgh). In any event, here I am blogging. By the way, if this blog seems different to you than others, it’s not because I’m trying to be unique or clever. It’s because I’ve never even read a single blog once in my life.

I guess the first question to answer is, given the amount of content that is on the internet, do I really have anything of substance to add? Let’s hope so. Otherwise, I’m wasting your time and mine. The intent of this blog will be pretty focused. My wife and I decided to take a one year family sabbatical to Costa Rica. Over the course of the year, I will articulate why we did this, what we hope to gain from this experience, why we chose Costa Rica, the steps involved in taking a family sabbatical, and how you can do this too. To be clear, the intent isn’t to steer people towards Costa Rica. It’s quite lovely here, but it’s not for everyone. Moreover, I view paradise as a mindset more than an actual, physical location. A beautiful place can help you achieve a certain state of mind, but you will be just as stressed in that beautiful place if you don’t make a conscious decision to change your perspective.

Before you put any stock in anything I write, you should get to know me a bit. Maya Angelou wasn’t the first to say it, but she articulated it as beautifully as anyone in stating: “You are the sum total of everything you’ve ever seen, heard, eaten, smelled, been told, forgot – it’s all there.” Since I’ll be conveying this sabbatical experience through my lens, it’s important that you have an understanding of my background. Each person’s interpretation of any situation can vary vastly from another’s because our lives leading up to any particular moment have differed. Although I’d like to think I’m more objective than most and have sought out experiences in an effort to continue to grow and become well-rounded, at the end of the day, I’m still just the sum of those experiences referenced by Angelou. Your experiences are distinct from mine. Thus, your lens might be different. 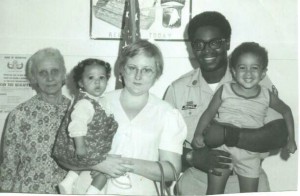 My great grandmother, mom, dad, sister, and me

As you can see from this picture, my sister and I are the product of an interracial marriage. Because it is a painful memory to them, my parents don’t like to talk about how they came together. From my standpoint, however, it is both compelling and relevant. Even though miscegenation laws were deemed unconstitutional by the U.S. Supreme Court in 1967 in Loving v. Virginia https://www.aclu.org/racial-justice/loving-v-virginia-case-over-interracial-marriage, my mom was arrested and charged with “unlawful cohabitation” for living with my father after that decision came down. Fortunately, an attorney who agreed to work pro bono took and won my mom’s case. Thereafter, even though it was technically legal for them to get married anywhere, they fled Wheeling, WV and drove to Spartanburg, SC to tie the knot. It’s strange to me that they went further South to get married, but they did so because they had heard they wouldn’t be given a hard time there. They were 17 and 18 when they did this and they’re still married today.

Being young, married, and having a baby on the way, my parents knew it was imperative for one of them to begin to build some type of career. So, despite the fact that it was 1970 and the U.S. was in the middle of the Vietnam War, my dad enlisted in the Army at the age of 17. After basic training at Ft. Dix and Advanced Individual Training at Ft. Polk, he was sent to Friedberg, Germany. When my mom was 19 and I was 4 months old, the two of us headed to Germany to live in Bad Nauheim with my dad. As my dad will tell you, joining the military was one of the best decisions of his life. He learned leadership, discipline, and sacrifice. For my mom, moving to Germany at that age profoundly impacted her outlook on life.

The challenges my parents experienced shaped them, and, in turn, influenced me. They entered into a marriage that 70% of Americans at the time thought should be illegal. As a result, they imparted to me that justice, fairness, and equality are issues I should care about and that I should never think any certain way or do anything simply because it’s expedient.

By living in Germany, they were exposed to a different culture as young adults and chose to embrace it. The desire to seek out the stressful, overwhelming, and wonderful delight that comes from being immersed in a society different from one’s own is something that has also been passed along to me. I’ve spent various amounts of time in Kenya, Ethiopia, South Africa, Belize, Guatemala, Puerto Rico, Barbados, Jamaica, France, Italy, Greece, Portugal, and Spain. I enjoyed all of those opportunities immensely, despite multiple setbacks and a few near-death experiences.

All of those prior events have brought me to this point. As a family, we are realistic about the fact that there will be a lot of fun times here in Costa Rica and some not so fun times. Not only are we looking forward to those experiences, we are looking forward to sharing them with those of you who want to read about them.

Why did we decide to do this? →